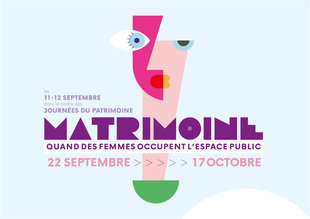 In September and October, the French-speaking community of Belgium celebrates “Matrimony Days”. Far from a neologism, the French word “Matrimoine” was gradually abandoned in favour of “Patrimoine”, the French word for “heritage”, thereby subordinating women to their fathers’ and husbands’ property. Resurrecting this term, Cité Miroir in Liège proposes an original exhibition dedicated to the journey of several Walloon women femmes who distinguished themselves in exceptional places. This is an opportunity to highlight those sites that bear the memory of women’s actions, fights and creations.

Through a photo exhibition at the heart of Walloon matrimony, visitors are invited to think about the place of women in the public space, their role in the different architectural, social and political dynamics.